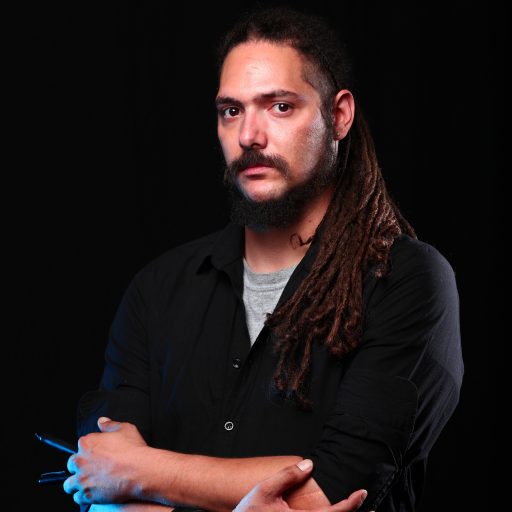 Hi! My name is Diego Graham, I am a 3D modeler and illustrator. Originally from Geneva (Switzerland), I am currently based in Lyon, France. I graduated "2D Designer" in 2011 from the "CFPArt" school in Geneva and "3D Game Artist" from the SAE Institute in Geneva in 2016.
Since 2009, I have been working with music bands and all kinds of event organisers to design posters, CD covers or T-shirts. Thanks to these projects, I had the privilege to become the official graphic designer of the concert hall "Le Rez-Usine" for the 2016-2017 season.
For a few years now, I have been looking to develop my skills in order to become a "3D Environment Artist". This is why since 2018 I have been devoting my time to digital illustration and 3D modeling, which I hope will allow me to enter the video game industry.
I am currently working as an "environment artist" and "concept artist" with two emerging independent video game studios based in Geneva. I also work as an illustrator for several artists in the music industry as well as with skateboard collectives. For each of these works, I try to produce the best possible results and to always professionalize myself further. I hope that the few creations presented on this website will be able to show it to you.
Finally, I'm actually a rather open and approachable person. I have an interest in art in all its forms and am also a guitarist in a metal band called "Burning Flesh" since 2007. I also do a bit of skateboarding. Nothing extreme, but I always have it somewhere for a good ride.
I hope these few words have enlightened you about my personality and will encourage you to contact me to talk about your project and design together incredible video games and visuals.